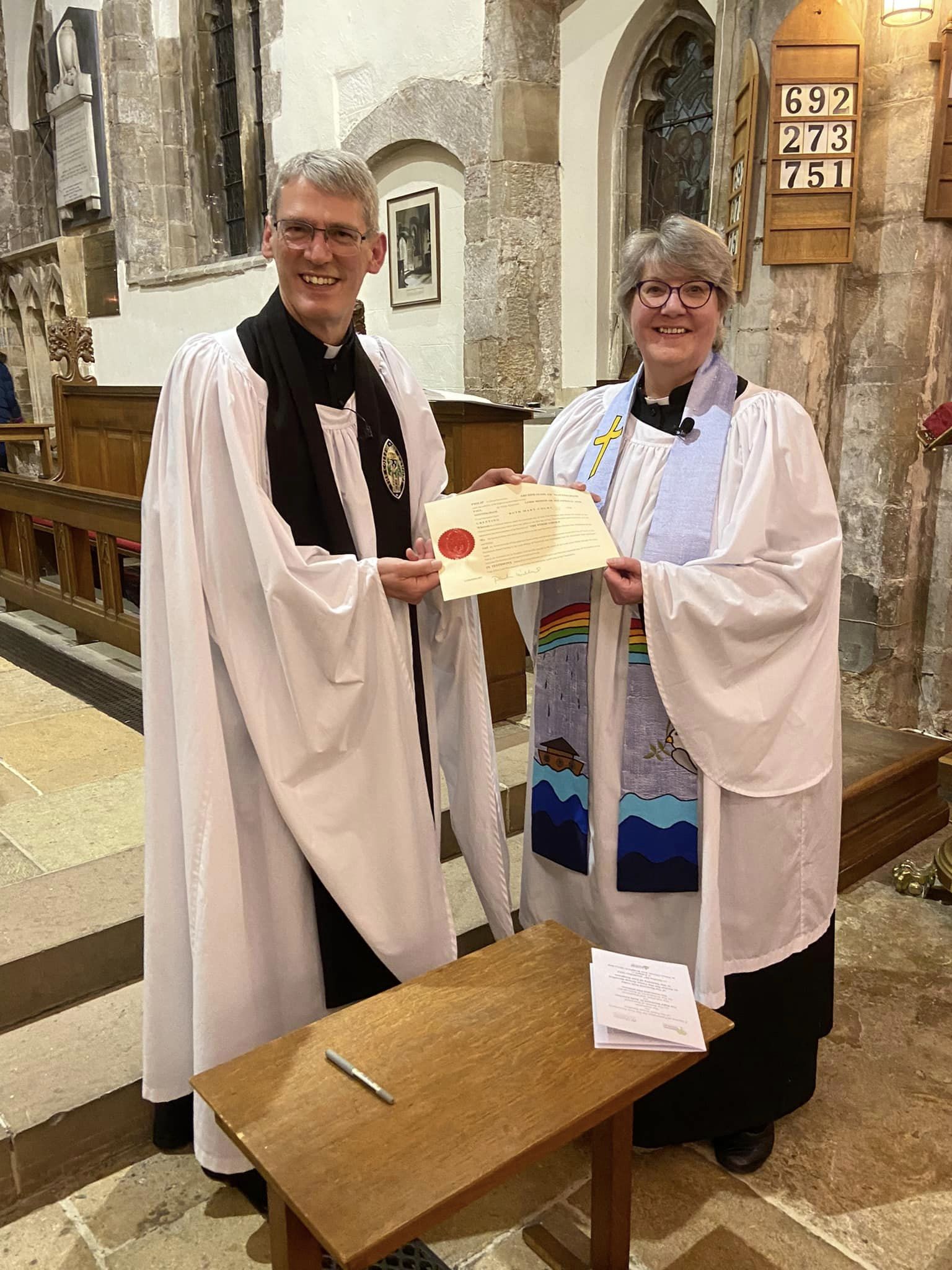 Revd Ruth Colby is Licensed as Rector of the Fosse Group

The Reverend Ruth Colby was licensed as Rector of the Fosse Group Benefice by the Archdeacon of Nottingham, the Ven Phil Williams, acting on behalf of Bishop Andy.

Revd Ruth was originally licensed as Priest-in-charge of the parishes on 2nd October 2019 in anticipation of the Pastoral Scheme that would create the new benefice. Last night’s service was a celebration of all that had been achieved in the first three years of Ruth’s ministry in East Bridgford, Kneeton, Flintham, Car Colston and Screveton.

The service included singing by the school choir at St Peter’s C of E Academy, East Bridgford. Headteacher Richard Tomlinson shared the encouragement that Ruth had brought in developing the relationship between the church and the school.

Richard talked about how Ruth has helped to evolve his school in the three years she has been there by creating an environment of awe and wonder that only she can bring. Ruth has also developed the relationship with Flintham Primary School.

Ruth’s stole was designed by the school’s competition winner, Angelina. It was brought to life by somebody in the village who is involved in creating costumes for the theatre.

Ruth was born in Leicestershire and spent her childhood and teenage years there before moving to central London to pursue a career in nursing, training at St Bartholomew’s Hospital and qualifying as a Registered General Nurse in 1982. She later moved to Norwich to specialise in midwifery, working within this speciality for nearly 20 years first in Devon and then in Leicester. In her long NHS career of over 37 years Ruth also worked more recently in both Public Health and then NHS commissioning.

After developing lay ministry skills and experience through involvement in their home church of over 20 years in Cottingham, Leicestershire, Ruth’s call to ordained ministry was realised in 2013 when she began part time training, alongside her NHS career, on the Eastern Region Ministry Course.

Ruth is married to Mark, a Partner in an Architecture & Engineering Consultancy in Leicester and they have four grown-up children, Bethany, Sophie, and twins Barnaby and Dominic. They are grandparents to 2 lively granddaughters, Evie and Effie. Ruth and Mark have 2 cats, Otto and Treacle.

Ruth has always been passionate about her faith and eager to share the Good News of Jesus Christ with others. She has wide experience in working with children and families and has a pastoral heart. She is greatly looking forward to exploring what God has planned for her and The Fosse Group in the years ahead.

After her licensing, Ruth said: “If you had told me on 2nd October 2019 when I was licensed as Priest in charge of the Fosse Group that within the first 3 years of my ministry here, we would have encountered a Pastoral reorganisation, a global pandemic and the death of the Monarch – all once in a generation events, I probably wouldn’t have believed you.

I continue to feel sure that God has called me here and for that I am grateful and thankful. I look forward to what God still has planned for us all as we move forward in faith together. As your Rector I am, apparently now entitled to graze 2 cows on Car Colston Common – so I had better look into that as my next task!

Blessings and thanks to you all and please keep me and the 5 churches in our 2 new parishes in your prayers as I continue to serve and minister in these villages in the Fosse Group.”